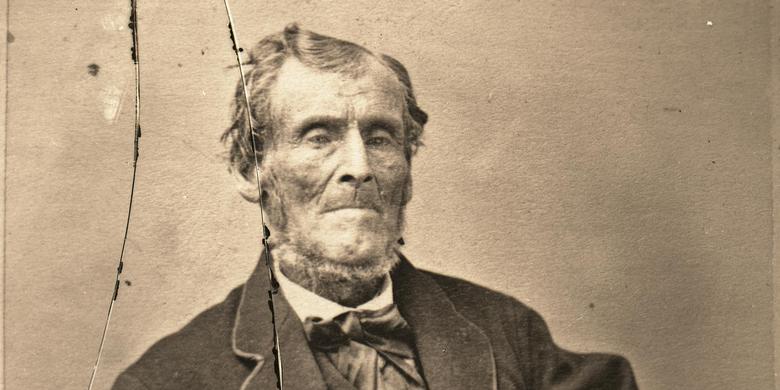 Shoutout to Mormon Think for having such extensive information and resources. For more about the witnesses to The Book of Mormon, visit their site! They have a lot of good stuff. They also provided us with the sources for this post, so go do some fact-checking there, should you feel inclined.

Here are 10 things you might not know about witness to The Book of Mormon, Martin Harris.

1. His wife thought The Book of Mormon was a lie. He told her it didn’t matter, because he could make money out of it.

“… Martin Harris and Lucy Harris, his wife, were at my house [early part of winter, 1828]. In conversation with the Mormonites, she [Lucy Harris] observed that she wished her husband would quit them, as she believed it all false and a delusion. To which I heard Mr. Harris reply: ‘What if it is a lie; if you will let me alone I will make money out of it!’ I was both an eye- and ear-witness of what has been above stated, which is now fresh in my memory, and I speak the truth and lie not, God being my witness.”

2. He made some crazy prophecies that didn’t come true.

“I do hereby assert and declare that in four years from the date hereof, every sectarian and religious denomination in the United States shall be broken down, and every Christian shall be gathered unto the Mormonites, and the rest of the human race shall perish. If these things do not take place, I will hereby consent to have my hand separated from my body.”

– Joseph Smith, The prophet his family and friends, pg 197

3. He changed his religion over 13 times in his life, before and after  Mormonism.

After Joseph Smith’s death, he accepted James J. Strang as Mormonism’s new prophet, and went on a mission for the Strangite church. Harris also accepted other men as prophets (and successors of Joseph), such as Gladden Bishop.

James Strang claimed to have a new set of supernatural plates and witnesses to authenticate them. Harris was also briefly intrigued by the “Roll and Book,” a supernatural scripture delivered to the Shakers.

4. He said he saw the BOM plates with his “spiritual eye”, not his actual eyes.

John H. Gilbert, the typesetter for most of the book, said that he had asked Harris, “Martin, did you see those plates with your naked eyes?” According to Gilbert, Harris “looked down for an instant, raised his eyes up, and said, ‘No, I saw them with a spiritual eye.'”

Two other Palmyra residents said that Harris told them that he had seen the plates with “the eye of faith” or “spiritual eyes.”

5. His wife also said that The Book of Mormon made Martin Harris a worse person and an abusive husband.

“In one of his fits of rage he struck me with the butt end of a whip, which I think had been used for driving oxen, and was about the size of my thumb, and three or four feet long. He beat me on the head four or five times, and the next day turned me out of doors twice, and beat me in a shameful manner….

Whether the Mormon religion be true or false, I leave the world to judge; for its effects on Martin Harris have been to make him more cross, turbulent and abusive to me. His whole object was to make money out of it. I will give a proof of this. One day at Peter Harris’ house (Abigail Harris’ husband) I told him he had better leave the company of the Smiths, as their religion was false. To this he replied, “If you would let me alone, I could make money out of it.’ It is in vain for the Mormons to deny these facts, as they are well known to most of his former neighbors.” (Vogel 1996-2003, 2: 34-36)

6. He was known to be gullible and superstitious.

“Once while reading scripture, he reportedly mistook a candle’s sputtering as a sign that the devil desired him to stop. Another time he excitedly awoke from his sleep believing that a creature as large as a dog had been upon his chest, though a nearby associate could find nothing to confirm his fears. Several hostile and perhaps unreliable accounts told of visionary experiences with Satan and Christ, Harris once reporting that Christ had been poised on a roof beam.”

7. He claimed to have seen the devil, who apparently has four feet.

“No matter where he went, he saw visions and supernatural appearances all around him. He told a gentleman in Palmyra, after one of his excursions to Pennsylvania, while the translation of the Book of Mormon was going on, that on the way he met the Lord Jesus Christ, who walked along by the side of him in the shape of a deer for two or three miles, talking with him as familiarly as one man talks with another.” According to two Ohio newspapers, shortly after Harris arrived in Kirtland he began claiming to have “seen Jesus Christ and that he is the handsomest man he ever did see. He has also seen the Devil, whom he described as a very sleek haired fellow with four feet, and a head like that of a Jack-ass.”

8. His wife was also his first cousin!

Just a fun tidbit for you.