Okay, we get it. You think Pope Francis is pretty cool. But we think you are forgetting a few important facts about the pope.

1. HE IS THE LEADER OF THE GREAT AND ABOMINABLE CHURCH

Elder Bruce R. McConkie wrote: “It is also to the Book of Mormon to which we turn for the plainest description of the Catholic Church as the great and abominable church.”

So even though he has ordered the Vatican to be open with their finances and even though he has drastically reduced the level of institutional opulence, the great and abominable church is known for loving wealth and luxury. I wouldn’t be surprised if he built a shopping mall right next to the Vatican!

I can’t cope with the pope! 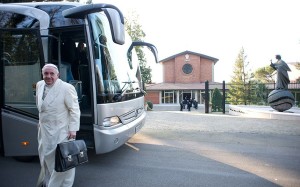 2. HE IS NOT A PROPHET, SEER, OR REVELATOR

He may have some cool titles, like Vicar of Christ, Supreme Pontiff, Bishop of Rome, Successor of the Prince of the Apostles, and Sovereign of the State of Vatican City, but none of the pope’s titles are Prophet, Seer, or Revelator. So how qualified can he actually be?

Honestly, can someone think of the last revelation the pope gave? It’s almost laughable to think that the leader of the largest sect of counterfeit Christianity doesn’t even talk about seeing visions or receiving revelations. If he were actually receiving revelations, he’d probably talk less about rampant poverty and hunger, child abuse, the Syrian war, and climate change, and would focus on essential issues like pornography and fighting gay marriage.

I’m at the end of my pope rope! 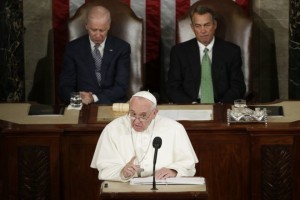 Telling Republicans how to run the country?! Who does he think he is, the spokesman for Jesus?

3. HE DOES THINGS TO BE SEEN OF MEN

Jesus condemned doing things to be seen of men. So every time you see the pope feeding the hungry, kissing the feet of prisoners, blessing the sick, selling his personal belongings to benefit the poor, embracing children, and openly fraternizing with all levels of society, remember, he is doing all these things to become pope-ular.

The pope would be a much better example of Jesus if he used the secret tunnels under the Vatican, rode around in an enclosed vehicle, and maybe only made a public appearance once or twice a year for special church meetings or his own birthday celebration. 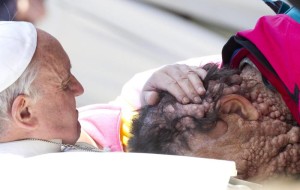 Is this really something Jesus would do?

Before your next popegasm, think about some of the Satanic tripe coming out of the Vatican. Besides accepting evilution and the Big Bang, he also called the Internet, “a blessing from God.” YOU CAN’T MAKE THIS STUFF UP.

It’s like he wasn’t even paying attention to the last General Conference where the Internet was described as “the faceless, cynical voices of those in the great and spacious buildings of our time… [With] electronic distortions carefully and deliberately composed to destroy our faith.”

Even worse, he says even godless ATHEISTS are redeemed by the blood of Christ! AS IF! This should be no surprise since he has also basically encouraged everyone to “drop the pope soap” by embracing homosexuals in the church! This is the very definition of calling evil good and good evil!

The pope is on dope. 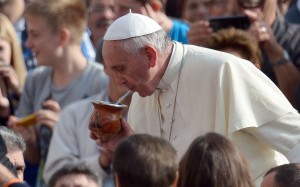 I wasn’t allowed to drink that on my mission.

In a recent press conference, the pope criticized Catholics “who believe they possess the absolute truth…” because even he knows that absolute truth is found solely in The Church of Jesus Christ of Latter-day Saints.

You may think it cute that he visits homeless shelters, feeds the hungry, and blesses the sick, but think of how much more the pope could do for the world as a Latter-day Saint. His time would much better be spent finding names on ancestry.com, doing endowments for the dead, going to tithing settlement, raising funds for Friends of Scouting, and cleaning church buildings. 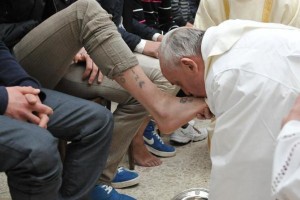 Washing feet is for the spiritual elite who receive the Second Anointing, not for common people! Way to throw pearls before swine! That foot has TATTOOS! Disgusting.