Growing up, one of my favorite experiences was going on scout campouts. I loved the weekends where I could go out with my buddies and brave the elements. Our leaders deserve to go straight to the highest heavenly resting place available for all the shenanigans they put up with. I look back at those memories and gratefully acknowledge the role they had in shaping me into the man I am today.

It’s for this exact reason that I am concerned with the backlash toward  the Boy Scouts of America’s recent policy changes. Within recent years, BSA made multiple policy changes with regards to LGBT individuals. In 2013, they voted to end the ban on youth participation based upon sexual orientation alone and in 2015 they made the same change with regards to adult leaders.

After these changes were announced, I witnessed a flood of angry LDS members write about how the LDS Church should leave the BSA and start their own organization. In fact, even the Mormon Newsroom, the PR branch of the Mormon church, released a series of statements. The first in July of 2015 stating in part,

“The Church of Jesus Christ of Latter-day Saints is deeply troubled by today’s vote by the Boy Scouts of America National Executive Board. In spite of a request to delay the vote, it was scheduled at a time in July when members of the Church’s governing councils are out of their offices and do not meet. When the leadership of the Church resumes its regular schedule of meetings in August, the century-long association with Scouting will need to be examined…” Source

With a follow up statement less than a month later,

“In the resolution adopted on July 27, 2015, and in subsequent verbal assurances to us, BSA has reiterated that it expects those who sponsor Scouting units (such as the Church) to appoint Scout leaders according to their religious and moral values “in word and deed and who will best inculcate the organization’s values through the Scouting program.” At this time, The Church of Jesus Christ of Latter-day Saints will go forward as a chartering organization of BSA, and as in the past, will appoint Scout leaders and volunteers who uphold and exemplify Church doctrine, values, and standards.” Source

I have personally witnessed many LDS members upset and disgruntled at the Church’s decision to move forward and continue in the program. I think it’s important to remember this is not the Church’s first disagreement over participation in the scouting program. 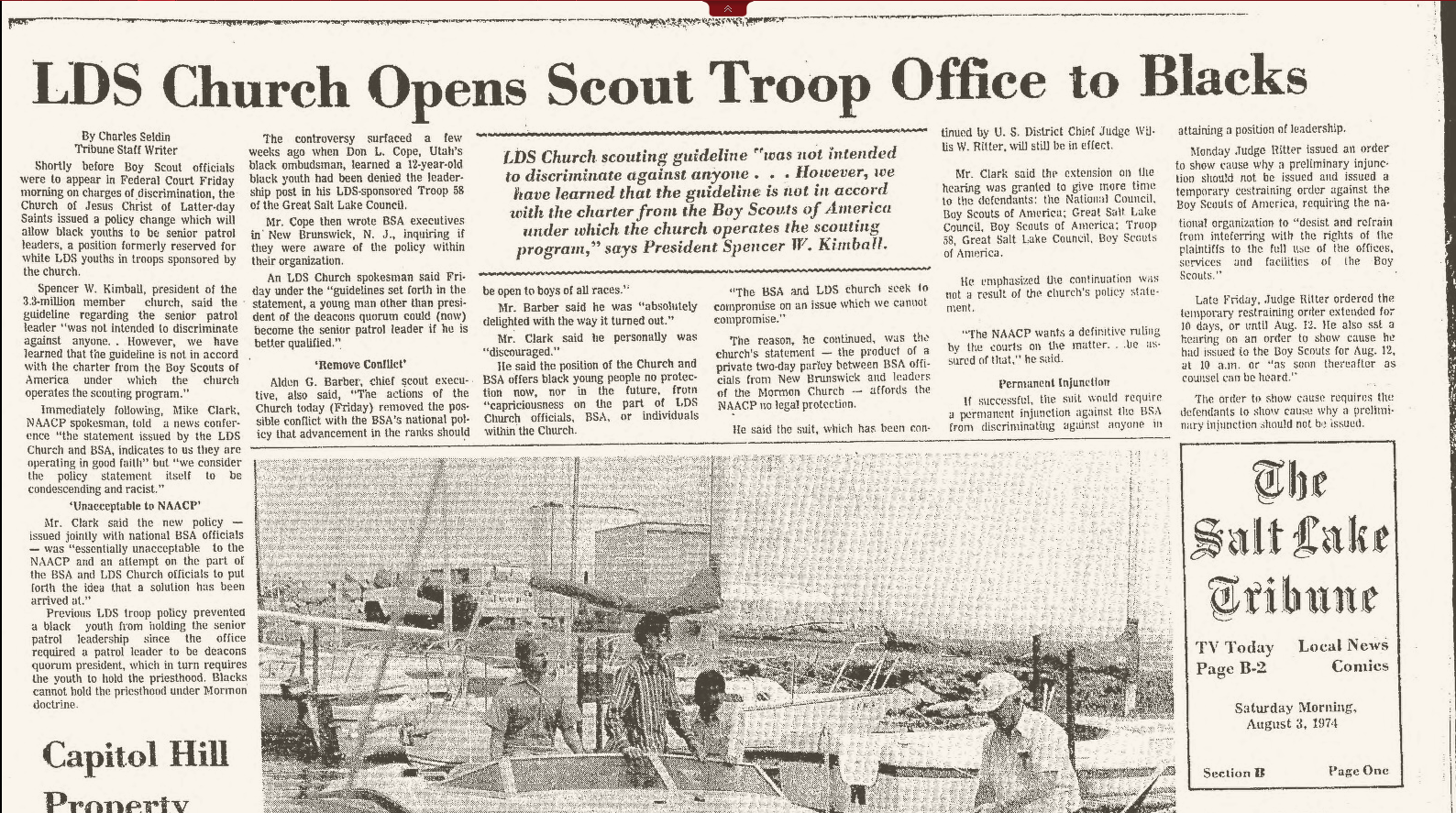 In 1974, the LDS Church was accused by the NAACP (National Association for the Advancement of Colored People) of discriminating against a 12-year-old black child by not allowing him to be a senior patrol leader. At that point in time, by policy, the Church only allowed white boys the privilege of being senior patrol leaders (For frame of reference, this article was published eleven years to the month after Martin Luther King Jr. gave his famous I Have a Dream speech.)

For those unfamiliar, the LDS Church did not allow blacks to be ordained to the priesthood. While there are a few outstanding theories as to why God did or did not want them to hold the priesthood and there are multiple LDS prophets who commented on the matter, the recently updated (2013) Official Declaration 2 states in its summary,

“During Joseph Smith’s lifetime, a few black male members of the Church were ordained to the priesthood. Early in its history, Church leaders stopped conferring the priesthood on black males of African descent. Church records offer no clear insights into the origins of this practice.”

Ultimately, the case did not go to trial. The NAACP found the policy change to be satisfactory. However, it wasn’t until four years later, in 1978 that the LDS Church allowed for the ordination of black males.

Now, I realize that there are probably a half dozen, fuming LDS members reading this article who are nearly screaming, “This isn’t the same thing!” Sure, skin color and sexual orientation are two different things. I’ll cede that ground but not another inch.

This is the exact same scenario. History is repeating itself.

Often times in life, we are scared of things we don’t understand. It used to be the prevailing theory at the time that blacks were somehow responsible for the color of their skin because of poor pre-earth decisions. We know now that the color of your skin is genetic and influenced in large part by how close to the equator your ancestors lived. That’s it.

The Mormon Church admits on its own PR website that they don’t know where same-sex attraction comes from. That’s ok. It takes science time to figure things out. However, what we can do is open our hearts and welcome those who may be a little bit different. You may not understand exactly why it is they feel the way they do, but I don’t think the commandment to love one another came with that contingency.

Scouting is an amazing program. It helps people connect with nature, develop leadership, and to be a part of a supportive community. Stop trying to deny others the opportunity to be a part of that because they’re LBGT. It’s wrong.