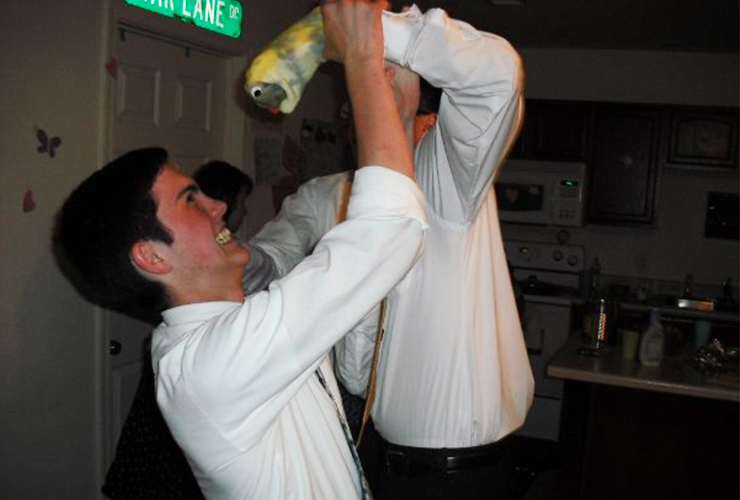 In May of 2009, I entered the Mesa, Arizona LDS Temple for the Mormon rite-of-passage ceremony called “the endowment,” where tithed patrons learn the mysteries of god through costume, film, and pantomime. It’s like Rocky Horror Picture Show meets Freemasonry.

During that ceremony, I, under the pressurized gaze of God, angels, and all my extended family made lifelong covenants, for which I’d received almost no prior briefing.

Some of the bigger covenants included: wearing masonic underwear forever, abstaining from extra-marital sex, and—I almost forgot—offering all my time, talents, and possessions to the church.

I could dwell on fucked-up-edness of surprising a teenager in such a psychologically saturated setting with lifelong commitments without even TELLING THEM SPECIFICALLY WHAT THEY WILL PROMISE, but I want to discuss something a little less sensational.

Near the end of the ceremony, squeezed between no “lightmindedness” and no “evil speaking of the Lord’s anointed,” was the promise to avoid loud laughter.

This specific covenant was no surprise to me. The phrase “loud laugher” had been eating a hole in my stomach lining for months before the ceremony.

After nights like these I don’t feel good. Usually I don’t feel sick until the walk home, but this time I felt it during the activity. I get tired of all the loud laughter and silly antics. The problem is that I’m usually right in the middle of it; maybe that’s why I feel it so much. Everyone wants to laugh. I still like to make people laugh, but I don’t like this sick feeling I have. Do people who live for “the circus” feel like this all the time? Maybe they don’t even realize it.

While a few hours away, thousands of Arizona State students were drinking until puking and then drinking again EVERY NIGHT, I, an 18-year-old scripture buff in a predominantly Mormon junior college town with one stop light, was sick to my stomach with guilt for having TOO MUCH FUN.

That wasn’t the only time I mentioned it.

On March 19, 2009, I wrote:
Last night was an awful. I behaved immaturely and inconsistent with the Priesthood I hold. Nothing “great or malignant.” Immaturity is the perfect word. Thinking back on it, it doesn’t seem so terrible, but I remember how I felt afterward. I do not want to feel that way again. I even called [name redacted] and apologized, saying that one who holds the Melchizedek Priesthood should not behave so foolishly. She obviously didn’t think I was too much in the wrong. She laughed, told me that it was okay and that I had nothing to worry about. “Loud laughter is one of the symptoms of a vacant mind,” said Harold B. Lee. I have to remember that.

On June 3, 2009—shortly after my temple experience—I wrote:

Today I heard Elder Maxwell reference a scripture that describes the “sickness” I feel in certain company and situations. It is Proverbs 14:13. It says, “Even in laughter the heart is sorrowful; and at the end of mirth is heaviness.

Some may think I was just a tightly wound kid. I think it’s obvious from the scriptural and prophetic references that it was religion that wound me up in the first place!

Religions are in the business of selling us antidotes our bodies produce on their own, to fight sicknesses religion gave us.

I didn’t feel bad because I was doing bad things. I felt bad because the church taught me I ought to feel bad. It was like a codependent partner who gaslights you into insanity and then positions themselves as the solution to your emotional instability.

Loud hearty laughter, like sex, can be SO healing, which is dangerous to an institution pretending to have a monopoly on healing power. Saying “no loud laughter” is like saying, “no good sex”—and the Mormons all but say that!

To most, this LDS standard is of little consequence, but to me, a teenager who wanted nothing more than to “obey and observe to perform every word of command with exactness”  (Book of Mormon, Alma 57:21), it was very damaging. It caused me to a deeply conflicted sense of identity and created an unnecessary barrier between me and other people.

Today, I embrace loud laughter (often mixed with lightmindedness  and evil speaking of the Lord’s anointed). It is a gift that I have learned to cultivate rather than repress.

I’m so glad to have reached a stage in my life where I can not only recognize how unconsciously manipulative the LDS church is, but also laugh about it.