This is the first of a multiple-part series discussing some of the issues surrounding Mormon polygamy. This segment will give a brief overview of the history of polygamy in the LDS church.

Daddy, Where Does Polygamy Come From?
Well son, when a man loves a woman very very much, and then loves another woman, and another….

Mormon polygamy unofficially began around 1833 when Joseph Smith’s “transaction in the barn” with his teenage surrogate daughter, Fanny Alger, was witnessed one night by his jealous first wife, Emma. Joseph, caught with his proverbial (and perhaps literal) pants down, explained that he had been commanded to reinstitute the Old Testament practice of polygamy by an angel with a drawn sword.

Over the next decade, Joseph took some 40 plural wives, some of whom were already married and some of whom were as young as 14. On July 12, 1843, the revelation now known as Section 132 was recorded at the request of Joseph Smith by William Clayton and used by Hyrum Smith to convince Emma that plural marriage was ordained of God.

According to Brigham Young, Emma hated the revelation and had it burned. It was later rerecorded, but remained unpublished until the open practice of polygamy was announced by church leaders in 1852.

During Joseph Smith’s lifetime, polygamy remained a highly secretive practice. In public, Joseph vehemently denied his involvement, stating that strict monogamy was “the only rule allowed by the church.”

The 1835 edition of the Doctrine and Covenants stated: “Inasmuch as this church of Christ has been reproached with the crime of fornication, and polygamy; we declare that we believe that one man should have one wife; and one woman, but one husband, except in the case of death, when either is at liberty to marry again.”

Willard Richards recorded in Joseph’s diary that Joseph “gave instructions to try those who were preaching, teaching, or practicing the doctrine of plurality of wives… Joseph forbids it and the practice thereof. No man shall have but one wife.”

In 1844, Joseph told the saints, “What a thing it is for a man to be accused of committing adultery, and having seven wives, when I can only find one. I am the same man, and as innocent as I was fourteen years ago; and I can prove them all perjurers” (History of the Church, vol 6, p. 411).

By that time, Joseph had already taken at least 25 plural wives. 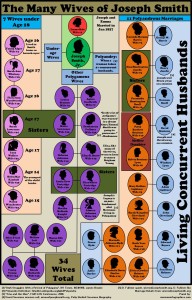 The Crap Hits the Fan

During the Nauvoo period, polygamy began spiraling out of control. As rumors spread that Joseph was authorizing plural marriages, he was compelled to double down. On one hand, members discovered practicing polygamy were excommunicated. Among them was Assistant President of the Church, John C. Bennet (we’ll talk more about him in a future segment). On the other hand, members who knew of Joseph’s polygamy and opposed it were likewise excommunicated. Among those was another First Presidency Counselor, William Law.

Law, offended by Joseph’s polyandrous proposals to his wife and believing him to be a fallen prophet, published a paper called The Nauvoo Expositor which highlighted the polyandrous activities within the church.

The paper obviously created a quite a stir in Nauvoo. I mean, imagine if President Uchtdorf and President Eyring suddenly came out saying that President Monson and other leaders were sleeping around. This was a big deal! Two days later, Joseph Smith and the Nauvoo City Council declared the paper a “public nuisance” and ordered the printing press to be destroyed. Because violent censorship is what people do when they have nothing to hide, right?

Now, destroying printing presses doesn’t tend to jive with a little something we call the First Amendment. So, when news of the event broke out, Joseph was summoned to court on charges of riot. After being incarcerated in Carthage jail, Joseph Smith was killed by a mob on June 27, 1844.

Polygamize—Going Public
Joseph’s sudden death came as a shock to the saints. Since he did not leave an immediate successor, church leadership became a matter of debate. After a series of speeches by the two main contenders (in which a miraculous transfiguration probably did not occur), the voice of the people decided to follow the Quorum of the Twelve Apostles, led by Brigham Young.

Under Brigham’s leadership, the saints emigrated westward to Utah where polygamy was practiced openly for the first time in the church. Brigham himself was sealed to 55 wives, five of which were under the age of 18, 11 of which were already married, and seven of which were previously married to Joseph Smith. Only 16 of his wives bore his 56 children. (Some families boast of being able to create a baseball team. Brigham Young could have a whole league!). 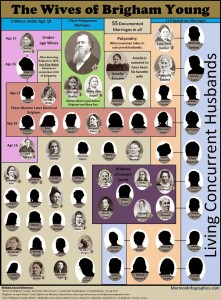 It was no doubt that Brigham considered polygamy an essential part of Mormon doctrine. He told the saints, “The only men who become Gods, even the Sons of God, are those who enter into polygamy. Others attain unto a glory and may even be permitted to come into the presence of the Father and the Son; but they cannot reign as kings in glory, because they had blessings offered unto them, and they refuse to accept them” (Journal of Discourses, v. 11, p. 268-269 August 19, 1866).

Elsewhere he stated, “Why do we believe in and practice polygamy? Because the Lord introduced it to his servants in a revelation given to Joseph Smith, and the Lord’s servants have always practiced it. ‘And is that religion popular in heaven?’ It is the only popular religion there…” (Deseret News, August 6, 1862).

Marital affection didn’t seem to be an overly important element of Brigham’s  polygamy. He taught the brethren, “Elders, never love your wives one hair’s breadth further than they adorn the Gospel, never love them so but that you can leave them at a moment’s warning without shedding a tear” (Journal of Discourses, v. 3, p. 354).

In the spirit of the Book of Mormon which only allows for polygamy to “raise up seed,” Brigham viewed the practice as a means to bring children into the world. Said he, “Sisters, do you wish to make yourselves happy? Then what is your duty? It is for you to bear children,…are you tormenting yourselves by thinking that your husbands do not love you? I would not care whether they loved a particle or not; but I would cry out, like one of old, in the joy of my heart, ‘I have got a man from the Lord! Hallelujah! I am a mother…'” (Journal of Discourses, vol. 9, p.37).

Trouble in Polygadise
As the Mormon empire flourished, Washington began to worry. In time, a series of laws were passed aimed to squelch polygamy as one of the “twin relics of barbarism” (the other being slavery). When polygamy became illegal, many members had to go into hiding. Brigham Young’s successor, John Taylor, spent much of his presidency in the “Mormon underground.”

During the administration of Wilford Woodruff, the political opposition to polygamy became too difficult for the church to endure. Despite repeated prophecies by many leaders that the church should not, would not, and could not abandon polygamy, the church eventually “abandoned” polygamy.

Now, I say “abandoned” in quotes because the Manifesto did not actually end Mormon polygamy. The Manifesto was a mere smokescreen to get the government off the church’s back. It was not given as an actual revelation, but more like a press release. In fact, B.H. Roberts testified before a congressional hearing that he did not believe the Manifesto was a revelation.

Publicly, the church had abandoned polygamy, but secretly, the practice continued. Church leaders continued to authorize and perform plural marriages in the U.S. and Mexico. It wasn’t until 1904 when President Joseph F. Smith issued the Second Manifesto that polygamy officially ceased in the church.

Since the church had taught that polygamy was essential to exaltation and that it must continue on the earth, many members were upset by the Manifestos. It seemed that the church was crumbling to pressure from Babylon. Several apostles, including the prophet’s son, Elder John W. Taylor, refused to cease the practice and were excommunicated or removed from their positions (Don’t worry, Elder Taylor was posthumously rebaptized, then posthumously excommunicated again, and then finally re-rebaptized in 1965).

A small group of men allegedly charged by President John Taylor with preserving plural marriage outside the church hierarchy, carried polygamy into the 20th century. They were, of course, excommunicated, but they laid the groundwork for most of the modern branches of Mormon fundamentalism including the FLDS church, the Apostolic United Brethren,  The Work, and others.

“I condemn [polygamy], yes, as a practice, because I think it is not doctrinal.” -President Gordon B. Hinckley in an interview with CNN’s Larry King

111 years since the Second Manifesto, church leaders are quick dismiss the practice as undoctrinal. They try very hard to dissociate from the public mind the LDS church and polygamy, even going as far as requiring that children of polygamists denounce their families before being baptized into the church.

Some leaders try to paint polygamy as a short-lived matter of practicality. But no matter how hard they try to ignore or offer overly simple justifications for polygamy (it was for the widows! lol), this skeleton in the closet (and Zelph knows about problematic skeletons!) continues to spook members who are determined to take a serious look at their history and doctrine.

Contrary to President Hinckley’s statement, polygamy is still technically a doctrine of the church. Polygamy remains canonized in Section 132 of the Doctrine and Covenants. The church continues to seal men to multiple women. Both Elder Russell M. Nelson and Elder Dallin H. Oaks are sealed to two women who will presumably continue with them in the eternities.

Because the church is hesitant to annul temple sealings, some men who remarry after divorce find themselves sealed to two living women. My own grandfather is in this situation. So I don’t want to call President Hinckley a liar, buuuuuuuut…….well, you can connect the dots. Though they may not be the bonnet-sporting fundamentalists of Colorado City, Mormons continue to believe in, and practice eternal polygamy.

Stay tuned for future segments that will take a deeper look at some of the problems of Mormon polygamy.