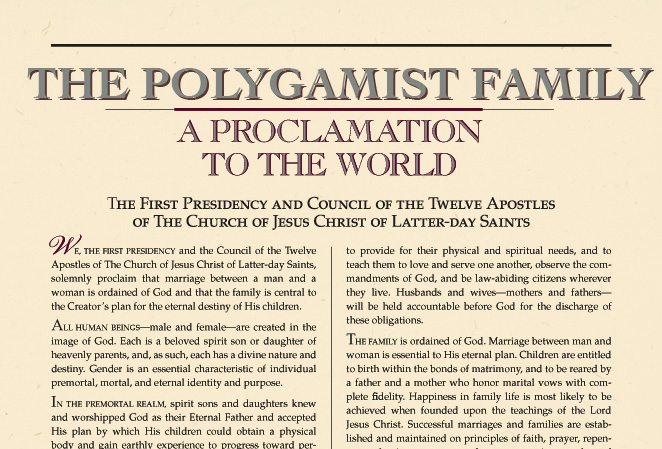 A PROCLAMATION TO THE WORLD

WE, THE FIRST PRESIDENCY and the Council of the Twelve Apostles and the Council of Fifty of The Church of Jesus Christ of Latter-day Saints, solemnly proclaim that marriage between a man and multiple women is ordained of Adam-God and that the polygamist family is central to the Creator’s plan for the eternal destiny of the organized intelligences.

ALL HUMAN BEINGS—male and female—are created in the image of Adam-God. Each was an intelligence, organized by celestial beings living on the sun, and, as such, each has a divine nature and destiny. Gender is an essential characteristic of individual premortal, mortal, and eternal identity and purpose.

IN THE PREMORTAL REALM, all the intelligences knew and worshipped Elohim, Jehovah and Michael as their Eternal Fathers and accepted their plan by which their sons could obtain a physical body and gain earthly experience to eternally progress and ultimately realize their divine destiny as heirs of eternal wives. The divine plan of obedience enables righteous polygamist family relationships to be perpetuated beyond the grave. Sacred ordinances, covenants, penalty oaths, and vengeance vows available in the Endowment House make it possible for individuals to return to the presence of Adam-God and for righteous polygamist families to be united eternally.

THE FIRST COMMANDMENT that Jehovah gave to Adam-God and his wives, including Eve, pertained to their potential for parenthood as husband and wives. We declare that Adam-God’s commandment for His children to multiply and replenish the earth remains in force. We further declare that Adam-God has commanded that the sacred powers of procreation are to be employed only between man and several women, spiritually wedded as husband and wives.

WIVES have a solemn responsibility to care for their husband and for their children. “Children are an heritage of the Lord” (Psalm 127:3). Women have a sacred duty to rear their children in love and righteousness, to provide for their physical and spiritual needs, and to teach them to love and serve one another, observe the commandments of God, and be law-abiding citizens whenever convenient. Husbands and wives—mothers and fathers—will be held accountable before Adam-God and their priesthood leaders for the discharge of these obligations.

THE POLYGAMIST FAMILY is ordained of Adam-God. Marriage between man and several women is essential to His eternal plan. Children are entitled to birth within a large Mormon family, and to be reared by a father and mothers who honor marital vows on condition of death. Happiness in family life is not as important as obedience. Successful marriages and families are established and maintained on principles of patriarchal order, obedience, faith, prayer, shaming, penalties, repentance, justice, hard labor, and not whining. By divine design, fathers are to preside over their families with boldness of the priesthood and callousness toward anything not aimed to land them in the kingdom of Adam-God, and are responsible to provide the necessities of life and protection for their righteous family members. Mothers are primarily responsible for the nurture of their children, as well as cooking, cleaning, not whining, and performing the procreative act without complaint or desire for exclusive attention from her husband whenever he wants to raise up seed unto the Lord. In these sacred responsibilities, mothers are obligated to help the father, for she is the help meet made from Adam’s rib. Disability, death, or other circumstances, like race, are signs of Adam-God’s displeasure. Extended families should be shunned when necessary.

WE WARN that individuals who violate covenants of chastity, who abuse spouse or offspring, or who fail to fulfill priesthood responsibilities will have their throats slit from ear to ear, that their spilt blood may rise up as sweet incense to Adam-God and atone for their sin. Further, we warn that the disintegration of the polygamist family will bring upon individuals, communities, and nations all the fornication, adultery, rape, and prostitution of ancient Rome. And if the church part with polygamy, the Lord will remove the priesthood from her midst and will choose another people.

WE CALL UPON responsible citizens and officers of government everywhere to promote those measures designed to maintain and strengthen the polygamist family as the only acceptable unit of society and the Celestial Kingdom.