If you want a good metaphor for me leaving the church, I didn’t swan dive into Babylon. I was dragged out kicking and screaming by my own conscience.

I left the church because of countless historical records, anachronisms in scripture, what I realized were gross practices by so-called prophets, and so on and so forth. I had every reason to stay—I had just been married in the temple to the love of my life, I lived in Mormon-dominated Utah, and I was a popular LDS blogger who had “inspired many” with what I now think were pretty weak articles. Leaving the church was my worst nightmare, and the “worst-case scenario” I could never even entertain as a possibility.

But I did it. I exerted more courage than I ever have before and I left, resigning a couple of months later.

Many Mormons, unaware of the grief ex-Mormons have gone through (and often continue to go through, thanks to personal pain, the judgement of friends and family, and sudden troubles in their Utah workplaces), feel that they are equipped to make statements like, “If you’ve left the church, why can’t you leave it alone?” Sometimes these statements are given ridiculous appendages like, “You obviously know it’s true deep down”, or “You’re just seeking confirmation bias to justify your new lifestyle.”

These statements lack compassion at their core, but they also display raging misunderstanding about ex-Mormons. I want to make it perfectly clear why I can’t “just leave it alone”. Hint: it’s not because I secretly think minor-marrying-Joe was actually God’s servant carrying out His will and I’m so desperate to ignore that “knowledge”.

Women have suffered throughout church history thanks to polygamy and sexism.

It is the duty of a woman to be obedient to her husband, and unless she is, I would not give a damn for all her queenly right and authority; nor for her either…” – Heber C. Kimball, Journal of Discourses 4:82 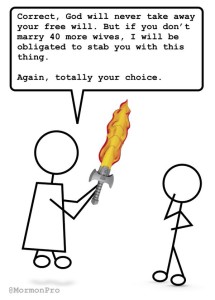 Forced into marriages they didn’t want, told to keep quiet, and viewed as generally inferior to their key-carrying male counterparts. (Regardless of current church culture, which is a lot kinder to women.)

I think we owe it to these now-deceased women to put a stop to the idea that polygamy was somehow a noble practice, rather than pure indulgence on the part of male leaders. I strongly recommend checking out Lindsey Hansen Park’s work for more information on how polygamy affected (and continues to affect) women. Women in the FLDS church continue to suffer—being forced to marry young, having their children ripped away from them, etc. because of the polygamy practices established by The Church of Jesus Christ of Latter-day Saints, beginning with Joseph Smith, and skyrocketing with Brigham Young. (Continuing until the law made it impossible to do.) Let’s not pretend Mormonism isn’t to blame when polygamy was taught by many church leaders as essential for exaltation. Those who denied it were labeled sinful and damned.

It is the duty of the first wife to regard her husband not with a selfish devotion… she must regard her husband with indifference, and with no other feeling than that of reverence, for love we regard as a false sentiment; a feeling which should have no existence in polygamy… we believe in the good old custom by which marriages should be arranged by the parents of the young people.” – Zina Huntington, wife of Prophet Brigham Young, New York World, November 17, 1869, as cited in The Lion of the Lord, pp. 229-230

It’s not ok that women were forced to endure miserable marriages. There are so many quotes from these poor women, stating that to do God’s will when it came to polygamy, one needed to regard marriage as a loveless affair, void of much joy.

Even in 2016, LDS women suffer because of a church that believes only men should be leaders, only men should go out and pursue whatever they’re passionate about, and that women should have as many children as possible. It’s no surprise that Utah leads the nation in antidepressant use. Even women who don’t necessarily feel unfulfilled while in Mormonism have remarked how much happier and more fulfilled they feel after leaving.

People, male and female, have suffered and continue to suffer because of Mormonism.

People lost money in the Kirtland banking fiasco thanks to Joseph’s false prophecies. (For more on that, click here.)

Zina Jacobs was forced to leave her husband and father of her unborn child to marry Joseph Smith. (And subsequently Brigham.)

Babies (and adults) died in handcart companies because they were told it was God’s will for them to leave for the journey at a dangerous time.

Church members in poorer countries can’t afford to buy medicine though they pay tithing, while North American wards spend $300 in tithing funds on a ward pizza party no problem.

Almost every LGBT youth in the church is depressed, many suicidal. Women are told they are sinful for wanting careers or for using birth control. (If you don’t believe me about the birth control, read the Eternal Marriage Student Manual.)

Black people were told they weren’t allowed to hold the priesthood or go to the temple until years after the civil rights movement took effect, a movement which the church opposed.

120 innocent people were killed by Mormons in 1857. The church refuses to apologize or even acknowledge that Brigham Young’s teachings or the temple death oath could be to blame.

People are shunned by their families and friends for leaving the church.

Missionaries endure psychological abuse and suffering, thinking it’s in the name of good. My friend’s weekly email last week said that she knew if people weren’t joining the church in her area, it was her fault—because of her disobedience. Missionaries literally believe that if they leave their apartment 5 minutes late, God won’t bless them with the opportunity to teach someone about the church He wants them to be teaching about.

Non-members suffer when the Church tries to legislate its doctrinal opinions on society with political pressure.

Women like Lindsey Stirling are shamed by their own tribe because of something as stupid as what clothes they choose to wear.

However nice an abusive spouse is when he’s not being abusive, you still shouldn’t be married to an abusive spouse. And on that note, you’d never tell a mother who’d escaped her abusive husband to just “let it go” when it came to the fact that her kids were still in that violent home.

Some people really would rather stay in The Matrix and feel happy. But for me, even my own happiness isn’t worth the damage to others’ happiness (see #2). I cannot perpetuate something that is false and wrong, even if there are good things to the church, like the importance of family. (A notion which seems to fade fast when someone leaves…)

Mormons are encouraged to share their beliefs. Ex-Mormons are shamed into silence, leaving many feeling desperately alone to grieve.

I am simply not ok with this. Since announcing that I was leaving the church, I’ve had so many people come to me and tell me they’d been having similar feelings, but felt totally alone and like they couldn’t tell anyone. These people are suffering in silence while their fellow Mormons loudly proclaim how their marriages are better because they are the only ones guaranteed for eternity, and how they are happier because they keep the commandments, and so on and so forth. Mormons celebrate sharing their views very loudly and publicly, and condemn anyone else who shares different ones.

Starving children in Africa continue to starve while you gush on Facebook about how God helped you find your keys. Every hour you spend in the temple is time you could spend actually helping the world. I could go on, but I won’t.

It’s not a sin to leave the church, and it usually takes great moral courage.

Mormons need to stop shaming people for leaving. Following your conscience and moral compass when everyone around you condemns you for it is one of the most difficult things in the world.

Mormons—before you judge your ex-Mormon friends or family members for leaving the church, or refusing to leave it alone, consider how limited your understanding of their reasons might just be, and how you have the ability to look into every one of their claims to decide for yourself, in an educated way, whether they are true or false.

You may label ex-Mormons sinful or immoral, “anti” or “bitter”, but it could be their disgust for immorality that led them out of the church, and that keeps them caring enough to try and educate others about what they’ve learned. I for one will never force someone to listen to me talk about the church. But I won’t pretend all is well in Zion. There are too many people, past and present, who deserve more than that.