A little boy woke his parents with a sudden outburst of crying. After rushing to his room, they saw him on the floor and asked what happened. Through tears he said, “I fell out of the bed.” When they asked him how, he sheepishly responded,  “I wasn’t in far enough.”

As a counselor for the church’s Especially for Youth (EFY) summer camp, I often used this anecdote (credit to John Bytheway, maybe?) to illustrate the danger of limited involvement in the gospel. I warned the teenagers that if they weren’t “in far enough,” they would fall right out of the church.

It was a poignant example for me. Once in middle school, I fell off the top bunk and hit my face on the nightstand, sending my braces shooting into my gums. I knew the danger of falling off the bed.

But what I didn’t realize during my time as an EFY counselor is that there’s another side (pun always intended) to the bed metaphor. One can fall out of a bed because one is not in far enough OR because one is too far in.

As a church member, I bought into the narrative that everyone who falls out of the church does so because they aren’t in far enough. I accepted the explanations that they were simply lazy, offended, uncommitted, or wanting to sin. All the while, I tried to ensure my own safety by delving further and further into the gospel.

I did this until I fell out the other side.

I had been a leader in the church, serving as President of the Deacons and Teachers quorums, first counselor in the Priests and Elders Quorum, Assistant to the Mission President, and Ward and Stake Executive Secretary. I had attended early morning seminary and earned enough institute credits to have a minor in Religious Studies.

As a full-time student with multiple part-time jobs, I still attended the temple regularly and participated in all my meetings. Though I was a poor, I paid a full tithe and gave generous fast offerings.

I had many spiritual experiences: when I felt like there was a candle inside me at my baptism; when I heard a choir sing “Silent Night” and KNEW that Jesus loved me; when I felt a voice pierce my soul like a laser beam saying “I know you;” in the MTC when I heard Elder Holland speak and I felt like my face was literally glowing; when, after leaving the temple, I felt so much love that I had to restrain myself from hugging strangers on the street; and the many times I felt “pure intelligence” helping me comprehend a common principle with such incredible new clarity, as if I were understanding it for the first time ever.

But rather than keep me securely tucked into the church, my passion led me right through the warm fuzzy blankets, off the other side and onto the floor.

My whole life, I considered my devotion to be somewhat unique. I thought I was special. Out of the bed, I found myself surrounded by others who were just as devout as I had been.

They, like me, fell out of the bed not because they cared too little, but because they cared too much. Their love for the church required them to seriously investigate its claims. Their commitment to the highest ideals of the gospel motivated them to more objectively evaluate the church’s morality. And their desire to stand for the right no matter the cost, in many cases resulted in damaged relationships, financial crisis, and church disciplinary action.

These little monkeys falling off the bed are the ones the church doesn’t want to know about. After all, the church’s expectation is that your increased interest in the church will result in greater fulfillment in the church, which will grow exponentially until the day you get a Kolobian condo and begin creating worlds with your own harem of wives. 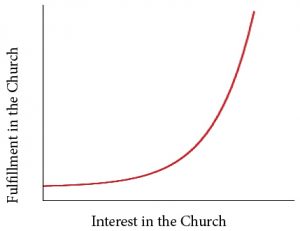 Thus, within the realm of church expectations, there is only one explanation for those who aren’t fulfilled in the church — a severe lack of interest. This is why once-extremely-faithful apostates are STILL being dismissed as those who “weary in well-doing” and “tire of living a religion that requires so much.” The church can’t validate them without acknowledging that its spiritual growth model isn’t inherently exponential. No wonder apostates have church leaders waking up on the wrong side of the bed! 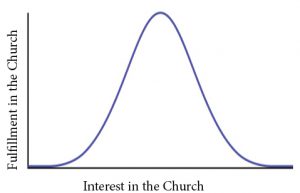 The discrepancy between expectation and reality accounts for the for the church’s inability to acknowledge — let alone understand — apostates. It simply can’t recognize that extremely devout people could possibly lack fulfillment because it would contradict their fundamental view of spiritual progression. Thus, they have to lump them in with the inactives.

Now, I don’t have a problem with inactives. I think any disinterest in the church is valid. After all, you don’t have to have to wait for someone to shit the bed before you know you don’t want to sleep in it. But I do recognize the problem of trying to paint these two distinctly different paradigms with the same broad brush.

The point is, you can’t put the skeptics’ concerns to bed by treating them like inactives. It won’t work because they are on completely opposite sides of the curve. But, as I explained before, the church ultimately can’t believe this dualistic reality exists.