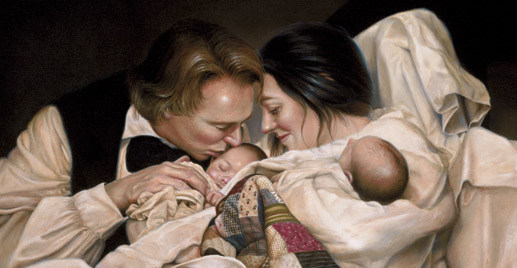 The subject deserves the controversy. On one hand, if Joseph Smith WAS a polygamist, then it is clear that he was also a liar since he repeatedly denied it in public.

“What a thing it is for a man to be accused of committing adultery, and having seven wives, when I can only find one. I am the same man, and as innocent as I was fourteen years ago; and I can prove them all perjurers.”
—Joseph Smith (History of the Church 6:411, May 26, 1844)

If Joseph Smith was NOT a polygamist, or if his “dynastic family sealing” was non-sexual, then it is clear that polygamy was thereafter bastardized by the Brighamite church which did view polygamy as inherently sexual.

“Sisters, do you wish to make yourselves happy? Then what is your duty? It is for you to bear children… Are you tormenting yourselves by thinking that your husbands do not love you? I would not care whether they loved a particle or not; but I would cry out, like one of old, in the joy of my heart, ‘I have got a man from the Lord! Hallelujah! I am a mother…’”
-Brigham Young (Journal of Discourses 9:37)

I have read a few books, essays, and speeches that attempt to demonstrate that Joseph Smith was not a sexual polygamist. Their motive, of course, is to preserve the image of Joseph Smith as a sexually pure and honest prophet.

Most of their arguments center on the fact that there is little primary contemporary source material to demonstrate the sexuality of Joseph’s extramarital relationships. Most apologists and historians are not that extreme, but still try to paint Joseph more innocently by removing sexual culpability in the cases of underage and previously married wives.

I think both perspectives are flawed. The evidence (secondary and recollective evidence is still evidence) is far too vast for the Brighamite conspiracy theory to be plausible, and the nuanced apologetic view, per usual, drastically distorts the obvious meaning of words. Furthermore, both approaches ignore the theological context of sexual polygamy.

Jacob 2
It seems clear from Jacob 2 that the Book of Mormon condemns polygamy except in one case: having children.

27 Wherefore, my brethren, hear me, and hearken to the word of the Lord: For there shall not any man among you have save it be one wife; and concubines he shall have none;

30 For if I will, saith the Lord of Hosts, raise up seed unto me, I will command my people; otherwise they shall hearken unto these things.

The seed is the reproductive part of the plant. In scripture, “seed” is frequently used to mean “posterity.” Even the English word, inseminate, comes from the Latin word, inseminatus, meaning, “to cast as seed.”

Tell me, can you raise up posterity without insemination? Could the Nephites or Joseph Smith do that without sex? No! So the ONLY exception that the Lord gives for polygamy inherently involves sex.

Now, I’ve had this discussion with a few polygamy deniers. They argue that in this passage, the Lord is referring to spiritual posterity, not literal posterity. You know, “seed of Abraham” adoption stuff.

Okay, let’s look at the context — Jacob is talking about the law of chastity, which is defined in the LDS temple endowment as: “the sons of Adam and the daughters of Eve shall have no sexual relations except with their husbands or wives to whom they are legally and lawfully wedded.”

After condemning the plurality of wives and concubines, the Lord gives his one caveat, then continues talking about the heartbreak of women whose husbands are unfaithful.

If the nature of “spiritual seed” is inherently non-sexual, then why did the Lord randomly insert it into a chapter that is absolutely saturated with sexual language? It would be completely out of place.

Section 132
The inherent sexuality becomes more obvious when we look at Section 132, the revelation that frames the theology and implementation of polygamy.

After God explains the New and Everlasting Covenant, he then talks about Abraham’s multiplicity of wives. Does the Lord use language that suggests “spiritual seed?” Not even a little bit.

34 God commanded Abraham, and Sarah gave Hagar to Abraham to wife. And why did she do it? Because this was the law; and from Hagar sprang many people. This, therefore, was fulfilling, among other things, the promises.”

35 Was Abraham, therefore, under condemnation? Verily I say unto you, Nay; for I, the Lord, commanded it.

So God commanded Abraham to take Hagar as a wife so that many people could spring from her. What was God’s only condition for polygamy in the Book of Mormon? To raise up seed.

It gets even clearer.

37 Abraham received concubines, and they bore him children; and it was accounted unto him for righteousness, because they were given unto him, and he abode in my law;”

Abraham received concubines. If the purpose of polygamy is spiritual seed, then what the heck is a spiritual concubine?!

Thereafter the Lord answers some question about adultery, you know, the sin of having sex with someone who is not your spouse.

41 And as ye have asked concerning adultery, verily, verily, I say unto you, if a man receiveth a wife in the new and everlasting covenant, and if she be with another man, and I have not appointed unto her by the holy anointing, she hath committed adultery and shall be destroyed.

What meaning does “be with another man” have other than the obvious one?

After some serious mansplaining to Emma, the Lord then discusses the logistics of implementing polygamy.

61 And again, as pertaining to the law of the priesthood—if any man espouse a virgin, and desire to espouse another, and the first give her consent, and if he espouse the second, and they are virgins, and have vowed to no other man, then is he justified; he cannot commit adultery for they are given unto him; for he cannot commit adultery with that that belongeth unto him and to no one else.

Are we clear on what it means to be a virgin? It means a person who has never had sexual intercourse. SEXUAL INTERCOURSE.

Here is that verse in the common tongue: “If a man marries a woman who has not had sex and desires to marry another, and the first wife is okay with it, and he marries the second, and they have not had sex, and she has not married another man, then he is justified. He can’t commit the sin of having sex with someone who is not his wife for his wives are given to him; for he can’t cheat with someone who belongs to him and nobody else.”

The only way to interpret this verse (and the entire rest of the chapter) is to completely change the meaning of words like “marry,” “adultery,” and “virgin.”

Furthermore, to say that the Lord actually meant something else — something spiritual and not at all sexual — is completely unsupported by the text itself. It makes absolutely zero sense that God would use such sexually-charged language without giving so much as a wink that there was any meaning other than the obvious one.

The best part about that verse is that it lays out strict rules for the implementation of polygamy. It says the virgin has to be with one person only and the first wife (which could mean ANYTHING, lol) has to give her consent.

The thing is, Emma didn’t even know about most of Joseph’s wives, AND some of Joseph’s wives were not virgins, but were already sworn to other men. So even if polygamy was non-sexual, it is still obvious that Joseph Smith broke both those commandments.

It drives me crazy to read apologists who say we shouldn’t assume that Joseph had sex with his wives. Why shouldn’t we? Isn’t that what you do with a wife? Let’s do a poll among married people and ask them whether or not they assumed upon getting married that their relationship would involve sex. I suspect the vast majority would say that OF COURSE it would.

So go on about lack of contemporary evidence (as if we should expect Protestant women to write about illicit affairs with the prophet who had been threatened with destruction by an angel with a drawn sword). The contemporary evidence isn’t what convinces me Joseph had sex. It’s the very revelations that he himself provided on the matter which all directly point to sex.  If Joseph was not having sex with his wives then he was not attempting to raise up posterity. Since he didn’t raise up any known posterity, then he failed to meet any of the scriptural justifications given by the Lord.

It doesn’t seem like Joseph can walk away from this one with his integrity intact.