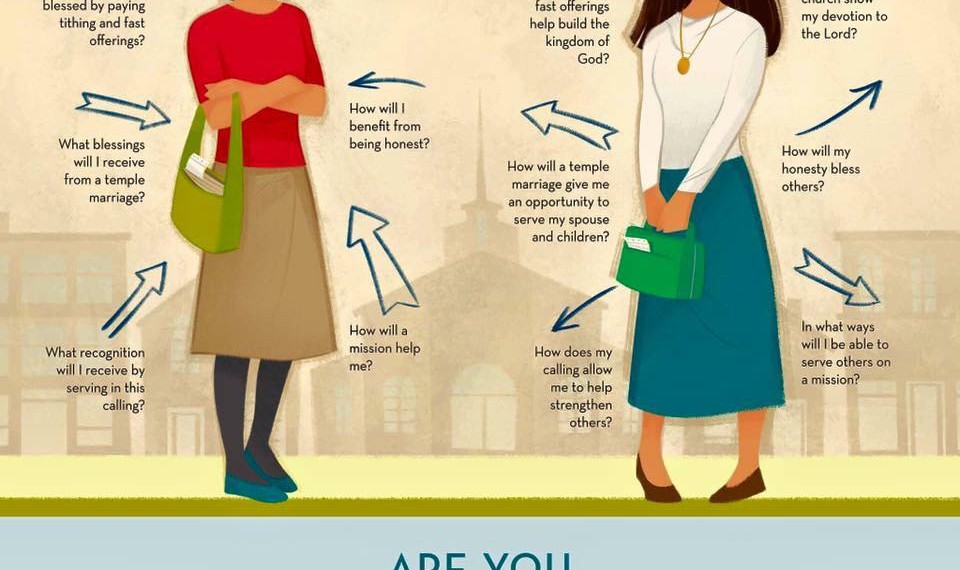 “Keep the commandments, and the Lord will bless you in the land.”

That’s one of the primary messages of The Book of Mormon—a book that also pushes theocracies and the idea that white people are more righteous/”delightsome”. (And condemns polygamy, but we’ll leave that for another time.)

When the church lowered its required age for missionary service in 2012, there was an influx of young women suddenly wanting to serve. A calling that was formerly reserved for those who couldn’t “find a husband” by the ancient age of 21, or the especially hyper-religious, suddenly became cool and almost expected in certain BYU wards, so I’ve heard. Young girls everywhere interpreted their guilt for not wanting to “serve” as feelings from the Holy Ghost that they should, and young men everywhere faced even more pressure to put in their papers.

3 years later, the church and its missionary efforts aren’t doing so hot. There are more missionaries, yes, but baptismal rates haven’t increased accordingly. The new anti-LGBT policy re: kids that we saw in 2015 didn’t exactly help Mormonism’s PR, and it’s unlikely that the church will attract any intelligent, got-their-life-together converts anymore. (Not that they really did before, but you know… it happened.) The policy reversed any minor (major, actually, if we consider Boyd “No one is born gay” Packer) improvements the church had made toward LGBT individuals, and made compassion seem just a bit further away once again.

Mormon women have been some of the biggest victims of the religion. They’ve been underdogs who are denied the ability to serve in legitimate leadership positions with decision-making power. They’ve been subject to the oppressive doctrines of men such as Joseph Smith and Brigham Young, who essentially saw women as property to be moved (or married) at their will. They’re told their eternal role is to be mothers, but they don’t hear anything substantial about their mother in Heaven. They’ve too often neglected their intellect and ability to change the world in incredible ways because the church tells them they must be mothers, and pretty much only mothers. (Ever heard of a neuroscientist who takes 30 years off for babies and then returns fresher than ever? Not often, I’m assuming. And don’t think I have anything wrong with women choosing to be mothers—I don’t. I just think they should be able to decide for themselves what they want.

However, it is 2015 now. This year saw Elder Holland proclaiming the awesomeness of women in general conference—an effort that was labeled mansplaining by most Mormon feminists, but an effort, nonetheless. Women are judged (somewhat) less for working outside the home, and more diverse circumstances and responses to them are acceptable in LDS wards. Heck, women can even wear pants at BYU now! No one is a 35th wife, and in general, things are really on the up for ladies of the church!

So it’s surprising-but-not-really that this is a message the New Era is choosing to put out into the world at the birth of 2016: 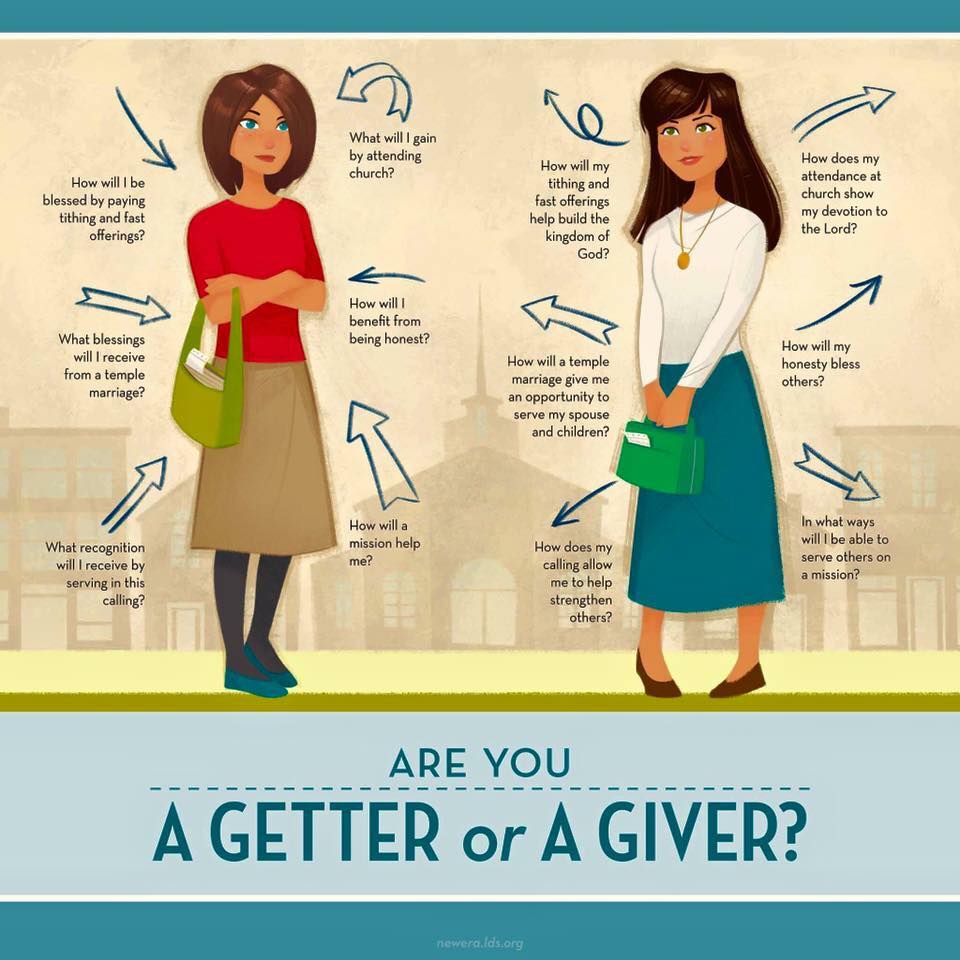 (Bow-legged = more righteous. Got it.)

I could give my thoughts on this image for ages, but I’d like to share a few comments that were posted on the New Era’s Facebook post. I think they sum up the issues I have with it very well.

“This is horrible propaganda. Judgemental in every way! Confident and strong women = bad
Insecure and self-assured women = good
“How can I disappear so the patriarchy and the institution can shine?” Really?!??” – Julienna

“In my experience, most church lessons, GC talks, magazines, etc. are from the “getter” perspective, so it’s funny that such a way of thinking is implicitly criticized here.” – Benjamin

“I’m not usually one to see fallacies in things such as this – but yes, having the girl on the right with her (presumably YW medallion and longer skirt and scripture case) implies she is more pious – what if she is on her way to church and the other girl on her way to work? While I always lean conservative in dress and behavior – there isn’t one way to “look” and be a giver. If there ever were an image of “don’t judge a book by it’s cover” it’s this one…” – Tonya

“If the Lord looks on the heart, and we can’t judge from outward appearances, why is the implication here that our discipleship can be determined by our clothing, hair, body language, posture and willingness to wear cheap jewelry? What I see: Girl with purse, selfish! Girl with scripture case: righteous, she doesn’t need books, pencils or a laptop! Girl with arms crossed, WAY too intelligent and assertive. Girl clutching scriptures and toes pointed in and haunched over: submissive, maybe a little confused, ready to be directed where she is told to go. Girl not wearing YW medallion: probably didn’t work on it enough, and probably skipped the Eagle Scout service projects of all the guys in her Sunday School class, too. Girl on right: longer skirt, sleeves and hair, for a church who really doesn’t want anyone to conflate us with our polygamist cousins we are sure stepping close to that “longer hair longer skirts longer sleeves = righteous” territory with this drawing.

Why are we not teaching our youth the healthy ways we need to give and receive in life? If this were a picture of a young man, there is no WAY the “giver” would be shown as a simpering, weak, afraid and equate that with being more pious. This is a terrible illustration and a poor example to young men and young women alike of how to make decisions and how those decisions can affect how we feel about our connection to others and the institutional church. You just painted “righteous” young women as looking like silent doormats. We can do better. And those questions the girl on the left is asking? ALL important. Both girls should be asking ALL the questions.” – Staci

“I don’t think it’s helpful for comparisons like this to be made. God knows and loves each individual heart. Both of these girls pictured here are modestly dressed and serving in the church. Are we really going to send girls the message that their every moment, question, and choice of clothing is noticed and judged?

And are we understanding now where many LDS women are getting the message that they are never enough, and must be perfect?” – Rebecca

What I will say is this. Girls considering a mission are probably 18/19. They’re young, they’re impressionable, and they probably don’t have their lives figured out yet. Considering women aren’t even “required” to serve missions, I’m surprised at how strongly the New Era is implying that they should. It’s not their place. I don’t think it’s Thomas S. Monson’s place either, but if I was still Mormon, I’d say this image was inappropriate insofar as the prophet has said nothing to back up the standard it is presenting. The guilt trip this image will provide for many scrupulous young girls is painful to think about. (Not to mention the guilt knee-length-skirt wearers will feel, or those who don’t carry their scripture cases everywhere they go…)

I guess we can add “false dichotomy” to the list of logical fallacies the LDS church operates under. Or at least the New Era’s social media team.

What do you think about the New Era’s image? Let us know in the comments.