All is not well in Zion. The Church published an article in the February 2016 Ensign with advice for members dealing with family leaving the Church. The amount of missionaries serving has dropped by 12%. And don’t forget the mass resignations by thousands in protest over the Church’s new policy directed at the children of gay parents. The Church is losing members, and the average Elder and Primary President are starting to notice.

Faithful saints are beginning to hear about the issues on a larger scale. Good intentioned people are doing their best to provide answers to questions about the historicity of scripture, polygamy, and other controversial issues. But with lack of clear revelation from the leadership of the Church on these worrisome issues, average members of the Church are being forced to become amatuer apologists in order to defend their faith from doctrinal inconsistencies and the scientific holes in the Mormon worldview.

Some apologetic arguments are more compelling than others, and not every bit of evidence against the Church is a slam dunk. And despite each side’s loudly typed shouts, I don’t think any of us on either side has answers for every single last concern. But I completely disagree with the idea that there is equal and compelling evidence on both sides.

Apologetics, whether it be for Mormonism, Islam, Judaism, Scientology, the people that read the Urantia book, global warming deniers, or the tobacco industry – all of these groups use similar arguments wrapped up in different packages. The end premise has already been determined, and contrary evidence will be cleverly dismissed. It is simply a matter of amplifying a small body of evidence to make it appear that both sides have equally compelling arguments.

To demonstrate this, take a look at this memo from Brown & Williamson, an arm of British American Tobacco, who was proposing the next steps in a PR campaign to sell more cigarettes in 1969:

“The Tobacco Institute has probably done a good job for us in the area of politics and as an industry we also seem to have done very well in turning out scientific information to counter the anti-smoking claims.”

There had been evidence since the 1950s that smoking and cancer were related. “Anti-Smoking” arguments had been around for years, but there was always an “expert” to repudiate those facts (and keep big tobacco from paying out to the people it harmed). The memo continues:

“Doubt is our product since it is the best means of competing with the “body of fact” that exists in the mind of the general public. It is also the means of establishing a controversy.” 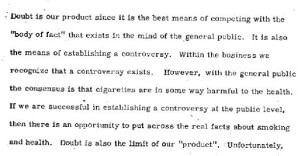 The scientific consensus was that smoking and cancer were linked. So if the existence of your organization relies on this scientific evidence being false, how would you overcome that? Brown & Williamson determined that you simply have to make the majority of scientists conclusions seem less reliable than they are. Big Tobacco funded studies that kept people confused and made it seem like both sides had equally valid points by “establishing a controversy”.

And unfortunately this is the same product that the apologists are pushing (minus the lung cancer, of course).

Typical expectations, such as horse meaning horse, archaeological evidence, someone having sex with their wife, translation to mean translation, rocks to be nothing more than rocks, and God’s spokesman speaking for God aren’t considered reasonable expectations. Ironically, we are expected to doubt our questions and only read “faithful” historians and scientists (like the ones with ties to BYU) rather than the respected ones without a dog in the fight. “Doubt is [their] product.”

Eventually, truth wins out (see the seer stone article from last October and the change to the Book of Mormon introduction). But by the time the Church owns up to its problems, the goal post has moved, meanings have been redefined, and literalism has given way to metaphors. What was once bold testimony against anti-Mormon lies has evolved into “no one can really know the answer”.

I don’t bring this up because I want to pick a fight with apologists. I simply have seen too many people feel needless guilt and fear as a result of apologetic “faithful answers”. Despite good intentions, their arguments eventually boil down to “you can’t really know the Church isn’t true, so you can’t be sure you should leave.” When they can’t provide clarity, they provide more confusion. Instead of truth seekers trusting their brain, their heart, and the general scientific community, people looking for substance are caught in spin and pseudo-science.

While apologists continue to grasp at the straws of chiasmus and NHM, scientists the world over are finding more evidence of human evolution, evidence of the Chinese first discovering the Americas, battles older than any in the Book of Mormon, and more. Human knowledge, though limited, is progressing past the walls that Mormonism built for itself.

Unfortunately for Mormonism, many of its truth claims are testable. It does not require faith (things “hoped for but not seen”) because many of these things we can see, test, and verify. The Church isn’t asking us to have faith in an unseen God, it is asking us to close our eyes to the wealth of knowledge humanity has already put forward. It used to be taught that real knowledge came through your mind and your heart. Now it only comes through the brethren and carefully worded Church publications.

To anyone struggling with doubts: keep chasing the truth. Dig through the spin on both sides. Consider your morals. Light will come, just maybe not from the place you were expecting.